Changing the narrative begins with a culture of disruptive listening On World Refugee Day, academics, refugee practitioners and refugees gathered at Heythrop College to explore the ways we can change the narrative and public discourse surrounding refugees and asylum seekers. Over 60 people attended ‘Refugee Stories: Changing the Narrative’, an academic conference that was the fruit of a number of structured encounters between refugees, academics, and practitioners, ensuring that the resulting theological reflections were not simply about refugees, but developed with refugees.

Sarah Teather, Director of JRS UK, said: “It was a hugely energising and inspiring day.  JRS wants to see lasting change in public attitudes and policy for the refugees we accompany.  We are aware changing hearts and minds is a big task. We hope bringing people together across disciplines to listen to one another, share ideas and build relationships will spark creativity.”

‘Refugee Stories: Changing the Narrative’ began many months before the conference itself was held with a number of conversations considering the human reality of seeking asylum in the UK within a backdrop of hostility. These encounters were possible thanks to a mutual openness from within the different, overlapping spheres involved – from academics, from refugees, and from refugee support practitioners. By opening a space of mutual listening, academics were able to shape their reflections on the experiences of those who personally experience this public discourse every day.

Sophie Cartwright, JRS UK Policy Officer said: “This collaboration has helped the voices of refugees to be heard and has pressed the vital issue of how neither the asylum system nor our public discourse listens to refugees. We hope it is an early stage of an ongoing and exciting project.” 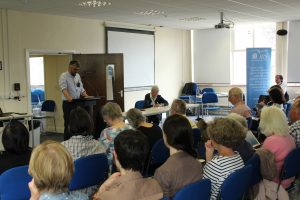 David Herd speaking on the importance of language from his experience walking in solidarity with those who had been indefinitely detained.

The morning sessions began with Sarah Teather describing the asylum system, the embedded culture of disbelief, and the hostile environment which disrupts the formation of any kind of relationship or community and JRS’ response which aims to counter that. David Herd described his experiences walking in solidarity with those who have been held indefinitely in immigration detention, and the importance of language – the asylum system holds people outside of a language which they cannot access or be a part of. Joshua Ralston (University of Edinburgh) spoke of the difficulty of ensuring resonance between rhetoric, policy and the Gospel; and how we need to find ways to resist and disrupt dominant anti-immigration arguments.

The afternoon saw attendees split into two parallel sessions where academics and refugees gave short talks which were the fruits of the conversations which informed the conference as a whole.

One of our refugee friends shared her experience of seeking asylum in the UK in a powerful and dignified speech where she described the stress that she was put under by the Home Office as they constantly relocated her around the country. She highlighted how difficult it was to respond to the Home office demand for certain kinds of evidence, saying, “When I fled it is difficult to gather together these things to take with you and once you are in the UK it is hard to keep in touch with people back home to get evidence for you.” She had had many claims refused for lack of evidence, because she was unable to meet an unreasonable burden of proof. Those attending were profoundly moved by listening to her story and astounded by her courage; she left the audience with these words: “After all I’ve been through I only hope that I get to have a place of my own where I can simply be me.” 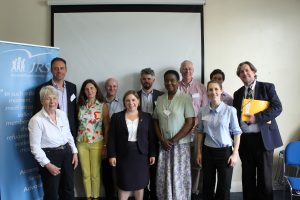 The speakers of the conference ‘Refugee Stories: Changing the Narrative’

The recording of the morning sessions will be available on the JRS UK website in the coming days.